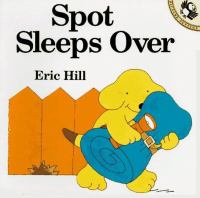 Spot Sleeps Over
by Hill, Eric (Author, Illustrator)
Rate this title:
vote data
Click an element below to view details:

Eric Hill was born on September 7, 1927 in London, England. During World War II, he was evacuated to the countryside along with thousands of other British children. Later, he worked in advertising before writing and illustrating a book about a puppy for his son. His first book, Where's Spot, was published in 1980 and became the first book in the Spot series. It incorporated the innovative lift-the-flap concept - something devised by Hill after he noticed a flap design on an advertising flyer. There are more than 30 books in the series including Spot's Birthday Party, Spot Goes to the Farm, Spot Goes to School, and Spot Loves His Friends. He also illustrated the Peek-A-Book series, the Baby Bear Storybook series, and a number of other children's books. He won several awards for the Spot books including a Notable Children's Book citation from the American Library Association and a Children's Book of the Year award from the Child Study Association of America. The popularity of his books led to an animated series, The Adventures of Spot, in 1983. In 2008, he received an OBE for services to children's literature. He died after a short illness on June 6, 2014 at the age of 86. (Bowker Author Biography)