A picture book of Harriet Tubman / by David A. Adler ; illustrated by Samuel Byrd. 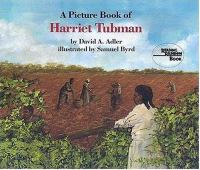 Search for related items by series

A Picture Book of Harriet Tubman
by Adler, David A.; Byrd, Samuel (Illustrator)
Rate this title:
vote data
Click an element below to view details:

A Picture Book of Harriet Tubman

David A. Adler was born in New York City. He attended Queen's College in New York City and later, earned an MBA in Marketing from New York University. He writes both fiction and non-fiction. He is the author of Cam Jansen mysteries and the Andy Russell titles. His titles has earned him numerous awards including a Sydney Taylor Book Award for his title "The Number on My Grandfather's Arm," "A Picture Book of Jewish Holidays" was named a Notable Book of 1981 by the American Library Association and "Our Golda" was named a Carter G. Woodson Award Honor Book. (Bowker Author Biography)