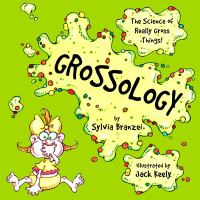 Sylvia Branzei is the author of Grossology , Animal Grossology , Grossology Begins at Home , Hands-On Grossology , and Virtual Grossology . She is the originator of grossology, or the idea of teaching science through gross things. Before devoting her life to grossness, Sylvia was a science teacher at a remote school in Mendocino County, California. She taught science to the entire school, from kindergarten through high school. Her writing experience includes coauthorship of The Soap Opera: Science on Stage Anthology , a play about the chemistry of soap. She authored several articles that appeared in The Science Teacher , Science Scope , Partners in Education , and Creation Spirituality . She wrote curriculum guides for NASA SETI and for the Department of Energy. Sylvia received her BS degree in microbiology from the University of Michigan in 1980. She received her MA degree in science education from California Polytechnic University in 1986. Jack Keely is an illustrator whose works include Dressing Up , Animal Friends , Ickstory , and Grossology .