Because / score by Mo Willems ; performance by Amber Ren. 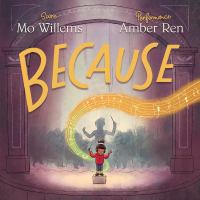 PreS-Gr 2-In this celebration of the chance happenings in life that inspire us, Willems presents an artfully written dedication to the power of music and those who live for it. Ren's lively and deeply saturated cartoon illustrations delightfully capture the audacity and power of inspiration as a little girl, by chance, gets taken to a concert and enjoys a symphony orchestra performance. The experience is so transcendent that she becomes galvanized to create music of her own. In order to get to that point, however, there were other people whose passions and hard work paved the way for that little girl in row C, seat 14. VERDICT An iconic book not only for musicians and music lovers but also for anyone wishing to celebrate those who came before them and those who come after.-Amanda C. Buschmann, Carroll Elementary School, Houston Â© Copyright 2019. Library Journals LLC, a wholly owned subsidiary of Media Source, Inc. No redistribution permitted.

*Starred Review* Because a man named Ludwig wrote beautiful music, a man named Franz was inspired to create his own. Because people wanted to hear it, they formed an orchestra. Because the musicians had practiced their instruments since childhood, they could play it beautifully. Because workers checked lights and swept floors, the concert hall was ready. Because her uncle had a cold, a girl accompanied her aunt to the performance. And when the orchestra played Shubert's Unfinished Symphony, it captivated the child, transported her, changed her. As she grew up, she worked hard, learning about music, playing it, and writing it, until, one day, she conducted her own piece in the same hall. And hearing it, someone else was changed. Writing simply but powerfully about inspiration, its links from one generation to another, and the seemingly random elements that culminate in a transformative moment, Willems creates a narrative that will resonate with both children and adults. In her first picture book, Ren uses expressive line drawings and subtle washes of color to illustrate this unusual story. Her depiction of music brings a sense of enchantment to the pages, particularly in the series of pictures indicating the girl's growing ability. This radiant picture book celebrates the magical, far-reaching power of serendipity. HIGH-DEMAND BACKSTORY: If there's an award, Willems has won it. That sound you hear is this new collaboration soaring off the shelves.--Carolyn Phelan Copyright 2018 Booklist

A quiet Willems book traces a child's path to her musical vocation as the consequence of a string of events and contributions: "Because a man named Ludwig wrote beautiful music-/ a man named Franz was inspired to create his own." For the love of Schubert, present-day musicians form an orchestra. They practice and schedule a concert, and because "someone's uncle caught a cold," a brown-skinned girl in a red sweatshirt gets a ticket, and the experience changes her. She floats out of the concert hall; vignettes show her practicing multiple instruments diligently. Because "she worked very hard"-and because "she was also very lucky"-she becomes a composer, and the performance of her work joins the chain of events that change lives. Willems's story celebrates making music while acknowledging those whom celebrations of high culture sometimes ignore: "Because workers checked the lights and the seats...." Debut illustrator Ren takes the sprightly energy of The Philharmonic Gets Dressed and adds depth, with distinctive expressions for each diverse face and a wonderful vision of the powerful emotions that music evokes-building on the idea that it takes multiple players to create something wonderful. Ages 3-5. Author's agent: Marcia Wernick, Wernick & Pratt Agency. Illustrator's agent: Jen RofAc, Andrea Brown Literary Agency. (Mar.) Â© Copyright PWxyz, LLC. All rights reserved.